Over Rwf40 billion saved through TIG 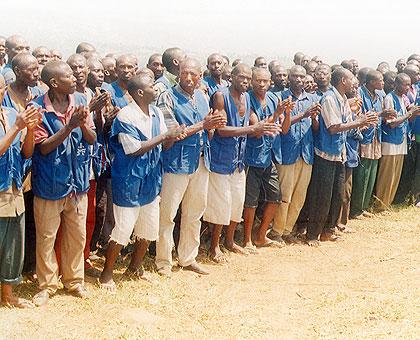 RWANDA HAS saved more than Rwf40 billion through community service as an alternative penalty to imprisonment, commonly known as TIG (Travaux d’Intérêts Généraux), a brief report from the Rwanda Correctional Service (RCS) indicates.

RWANDA HAS saved more than Rwf40 billion through community service as an alternative penalty to imprisonment, commonly known as TIG (Travaux d’Intérêts Généraux), a brief report from the Rwanda Correctional Service (RCS) indicates.

This is the value of TIG’s manpower mostly oriented in building roads in towns and remote areas, terracing, and building houses for the homeless who include survivors of the 1994 Genocide against the Tutsi.

Initiated as a reconciliation approach, TIG has helped build various stone-paved roads in Kigali and in other towns upcountry. Some 52,793 people who were sentenced to community service contributed 20 million carved stones that were used in building roads over the last eight years of the scheme’s existence.

The Commissioner for Production at the Rwanda Correctional Services (RCS), Egide Harerimana, remembers a road TIG manpower built to connect Rugerero Secondary School in Rubavu district to the main highway.

“Cars bringing school supplies used to leave them miles away and people used to carry them on their heads up to the school,” he said.

The mayor of Rulindo District in the Northern Province, one of the regions which is said to have taken adequately more advantage of TIG, told Sunday Times that the value of TIG performance was quite high.

Justus Kangwagye said convicts built new roads totalling 300 kilometres in Rulindo, their work on one bridge in the district drove its cost to Rwf30 million when it was supposed to cost more than Rwf50 million, and they built a dormitory for students at Tumba High School at a cost of Rwf20 million instead of more than Rwf70 million.

Getting TIG manpower starts with a district initiative. District officials design a project and submit their application to the RCS where they specify the value and number of the manpower and agree to feed and take care of them while using them in the services benefiting the community.

According to RCS officials, the new deal is that districts calculate the benefit in terms of manpower after using the convicts and give 25 per cent of the benefits in monetary terms to RCS.

This helps to contribute to the budget the government allocates to RCS.

Apart from terracing some 7,000 hectares of land and their activities to build roads, TIG is mostly known in the construction of houses.

According to the RCS report, TIG has built 743 rooms for the Nine-Year-Basic Education in different parts of the country, thus contributing to the Education For All policy. Most interestingly, they built 4,000 houses for the homeless serving the reconciliation purpose because some of their work’s beneficiaries are Genocide survivors.

In Murinja Cell of Gahanga Sector in Kicukiro District, 40 TIG servers from Gahanga camp are building more than 200 houses for Genocide survivors and other needy people.

“People out there might think that TIG workers deliver fake work, but their will to repair damages started by the time they pleaded guilty,” observed Jean de Dieu Gasasira, the supervisor of TIG in Gahanga camp.

The testimony of Veneranda Kabagwira, who is in TIG since 2007 and is set to complete her sentence in one year, suggests an improvement in the convicts’ understanding of the programme.

“At the beginning it was hard for me. I was thinking about my children and how they would survive while I am with TIG. But I got used and I have learnt a lot here. As far as I know, I am doing what I am meant to do,” she said.

Kabagwira said since she was in TIG, Genocide survivors near her home took care of their children, a good indicator that they welcomed her guilty plea.

Another TIG worker said his neighbours paid school fees for his two children though he had sinned against them.

Some prisoners and Genocide survivors agree that TIG helps them socialise, especially when the convicts are working out there in communities.

“I don’t have anything against the people in TIG because God healed my wounds from the Genocide. When they are here, we share what I can afford,” said Floride Mukarukwaya in Murinja Village, which TIG is building.

Mukarukwaya lost two children during the Genocide, but she said that she had forgiven the killer who pleaded guilty and is in TIG.

“I think TIG is a success. These people destroyed our houses, and they are now repairing,” she said, adding that Rwanda should make sure that no homeless remain among Genocide survivors.

Apart from this service which takes 40 hours per week, RCS has prepared various modules for TIG performers where they study English, entrepreneurship, civic education and literacy.

“We want to make them good citizens who, when they return to the community, will improve living instead of being a burden to the country,” said Paul Rwarakabije, RCS’s Commissioner General.

In the RCS report, officials denied some information that many TIG workers gave up and disappeared.

“It’s not the case. You know when two people are allegedly missing in this small country, everybody is aware. How can someone say that 200 or 300 people disappeared and we are not aware?” wondered Rwarakabije.

“A TIG member could change a camp and shift to another in informal ways and the poor recording would lead to the belief that they are missing. Normally, when a TIG performer is to change a camp, RCS staff in two camps supervise procedures.”

TIG punishment was previously given to people in category II and III who adequately pleaded and apologised before Gacaca courts about their involvement in the Genocide against the Tutsi in 1994.

RCS officials say TIG reduced the density in prisons by 53.3 per cent. A presidential order of November 2012 now gives ordinary courts the option to give this punishment to convicts with a sentence of five years and below in jail who fail to meet their monetary court fines.
Source:The Newtimes