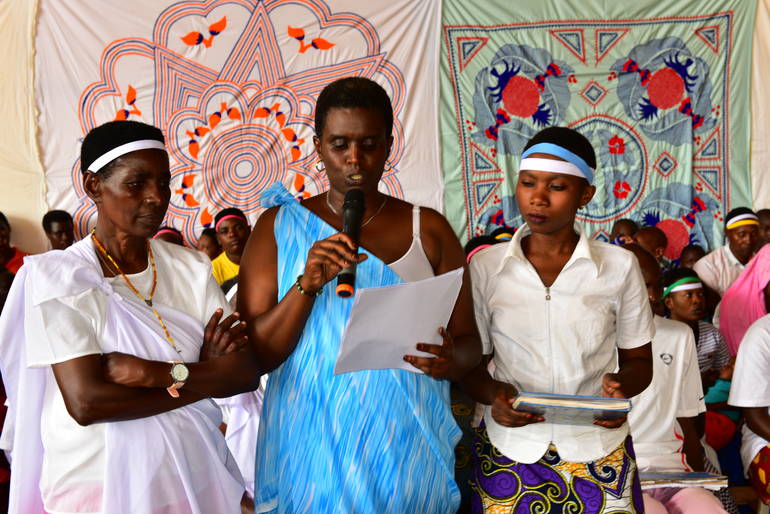 Female inmates exhibited some of their works like; tailoring, mushrooms farming, hairdressing, pedicure, manicure, and bakery. They appreciated RCS and its stakeholders for encouraging them in vocational training, and assured to use the gained knowledge in development of their family, after being released.

Some of two women who had finished their sentences were given some materials by CARITAS Byumba Diocese which is a core partner of Musanze Prison. Those materials are tailoring machine, and materials used in hairdressing.

“I really appreciate your courage in vocational training. Please use the knowledge you gained from here when you finish your sentences, and always remember your incomparable role and responsibilities in families and communities. To be imprisoned does not mean you are worthless, that’s why distinguished guests are here today to celebrate this significant day with you the knowledge  you gain here use it in economic development  of your family .” Said DCGP

DCGP also gave thanks to RCS stakeholders and various leaders for coming to celebrate this day in Musanze Prison. She acknowledged the role of stakeholders in correction and healing acts.

Axelle KAMANZI, Vice Mayor of Social Affairs in Musanze district, and a guest of honor, appreciated RCS and its stakeholders for taking into account female inmates.

“Thanks to RCS and its partners for considering female inmates, today, we are acknowledging the role of women in the development of a country, evaluating what have been achieved, and what can be done in enhancing their rights for achieving sustainable development.” She said.